The Book of the Law

All this and a book to say how thou didst come hither and a reproduction of this ink and paper for ever --
for in it is the word secret & not only in the English -- and thy comment upon this the Book of the Law
shall be printed beautifully in red ink and black upon beautiful paper made by hand;
and to each man and woman that thou meetest, were it but to dine or to drink at them, it is the Law to give.
Then they shall chance to abide in this bliss or no; it is no odds. Do this quickly!
~ Liber AL III:39 ~ 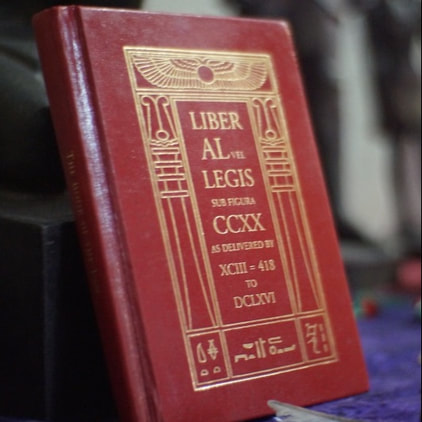 The Book of the Law (or “Liber AL vel Legis” in its formal Latin title, or just “AL” for short) is foundation of the aeon and of our work. The contents of this book were transcribed in 1904 by the prophet of the age, Aleister Crowley, being recited to him by præternatural sources with whom he had come into contact (see below for a high quality scan of the original document). The key Thelemic slogans “Do what thou wilt shall the the whole of the Law” and “Love is the law, love under will” and “Every man and every woman is a star” all come from AL. It is also quoted heavily in the Gnostic Mass.

The book comprises three chapters, 220 verses in all. Each from a triad of deity figures narrates one chapter. Nuit is “Infinite Space, and the Infinite Stars thereof.” Hadit describes himself as “the flame that burns in every heart of man, and in the core of every star.” The third, Ra Hoor Khuit, identifies as “the Hawk-Headed Lord of Silence & of Strength” and “a god of War and of Vengeance.” The overarching message delivered by these figures is the announcement of a new Law for mankind. This Law is emblematized by the word “Thelema” (or θέλημα in ancient Greek), which means “will.”

We’ll keep the description brief because the meaning of the book is left up for the individual to decide. Though as Thelemites we study it constantly, it is our practice and discipline to refrain from discussing or arguing specifics about what the book means, thereby avoiding the creation of dogmatic fiefdoms erected upon idiosyncratic sands. However it would be to our shame were we omit mentioning how transformative the book has been to many people, almost instantly upon first reading. Its verses are filled with voluptuous imagery, mathematical precision, and wild ardor.

Crowley himself wrote several commentaries on the meaning and interpretation of AL, none of which satisfied him very much save for the so-called “short comment” that discourages people from discussing their personal interpretations. He also wrote several accounts of the events leading up to his reception of AL, the most thorough of which is entitled “The Equinox of the Gods.”

Do what thou wilt shall be the whole of the Law.
The study of this Book is forbidden. It is wise to destroy this copy after the first reading.
Whosoever disregards this does so at his own risk and peril. These are most dire.
Those who discuss the contents of this Book are to be shunned by all, as centres of pestilence.
All questions of the Law are to be decided only by appeal to my writings, each for himself.
There is no law beyond Do what thou wilt.
Love is the law, love under will.
The priest of the princes,
ANKH-F-N-KHONSU
~ Liber AL: The Comment ~